The class uses an AVR32 microcontroller from Atmel, specifically, the UC3B type controller AT32UC3B1256, mounted on a small development board based on the successor of the copper board developed by StackFoundry, called bronze_v2, developed by Daniel Fasnacht.

The two really cool things about this device are:

Additional development tool installation guides are available from https://neuromorphs.net/nm/wiki/2011/usb11, but do not install the Atmel tools from Atmel; use the downloads as instructed below from attachments to this page.

To communicate with the copper|bronze USB board, we use Python (the python tutorial) and pyusb (pyusb tutorial). Underlying pyusb is the USB driver which is libusb. Again, see https://neuromorphs.net/nm/wiki/2011/usb11 for detailed instructions to develop code, program the controller's flash, and communicate by USB to the board. You will be confused by a large number of versions of these tools if you try to install without following these instructions. For faster download, some of the necessary files are below.

You will need to follow the following steps, referring to https://neuromorphs.net/nm/wiki/2011/usb11 for more details.

You might want to start with an existing sample project. Then you will run into the problem that there is no “user_board.h” for the AVR32 board. Please see the sample code below for sample header files for the AVR32 bronze board.

See the following documentation for more information. Remember we are using the AT32UC3B1256.

Within AVR32Studio, use the Help/Help Contents menu to open the built-in help. Then, within the document, navigate to the AT32UC3 Software Framework/Drivers section; there you will see sections for each peripheral, as illustrated below. 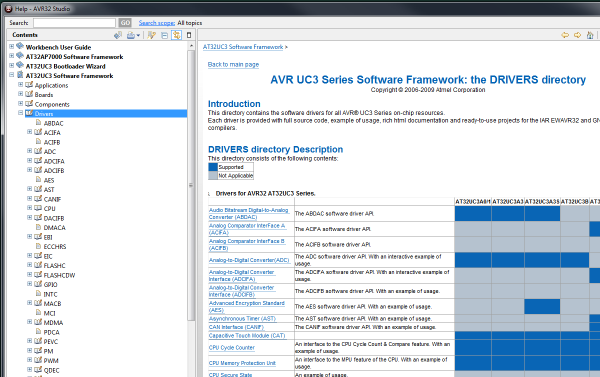 You may find that the copper board does not properly enter its application program and always boots up after reset or power on in “DFU” mode (Device Firmware Update mode). That happens because by default the PUER (Pullup Enable Register) does not enable the GPIO internal pullup resistors of 5-25k (nominally 12k) Ohms on the port pins, and the leftover internal pullup resistance on pin PA13 is not sufficiently small to pull the logic level to Vdd, so the AVR32 thinks it should go into DFU mode. You can easily correct this by soldering on the copper board or wiring on the breadboard a resistor of 10-20k Ohms from PA13=pin 25 to 3.3V Vdd. Then on reset PA13 will be held high and the application program will start. The bronze board has this pullup resistor added on the board.

For installers, please see the FTP download area at ftp://ftp.ini.uzh.ch/pub/INI/users/tobi/dig/uc/

There are reports that the downloads below are corrupted and that install of AVR32 studio cannot be completed.